A Guide to Synthetic Phonics

Home » A Guide to Synthetic Phonics
Previous Next

A Guide to Synthetic Phonics 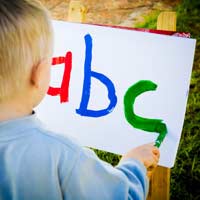 All words are made up of single letter sounds and synthetic phonics makes use of this in an effective teaching method. Here we explore what this method is and how it helps learning.

All the letters of the alphabet have their own sound and synthetic phonics is a teaching method where children aged five and upwards are taught the individual letter sounds and shown how to make whole words out of them. For example, you have the sound ‘b’ at the start of the word ‘banana’ or the sound ‘d’ at the start of ‘dog.’ When put together in pairs, some letters can also make new sounds, like, ‘sh’ in ‘shut,’ or ‘ck’ in ‘wick,’ and likewise the system continues as you put bigger groups of letter sounds together.

The idea of the synthetic phonics teaching method has existed for a while and research has show that it can be a very effective learning method for children. In fact, some children may learn and progress faster with literacy when they’re taught by the synthetic method than by other means. It’s also proved to be particularly useful for dyslexic children.

Where the synthetic phonics method is used in schools, children from the age of five are taught in this manner. They’re firstly shown and taught all of the different letter sounds and they then learn – almost immediately – to write these letters down, so they can see how they look on paper too. They’re then taught how the individual letter sounds can be used together to make simple words – usually words with three letters long.

The children will typically learn all of the main and most common letter sounds and the way they can be joined and blended together in a few weeks. Although it may seem quick, once they know the different sounds they can work on putting them together and building their learning ability.

Helping Your Child at Home

If you’d like to help your child with their learning, then you can use simple methods based on synthetic phonics at home. For example, you could get together with your child and make an A to Z poster to put up at home, with all the letters, their sounds and a memorable word or picture linked to each one. Or you could make use of magnetic letters and get your child to practice putting them together to make words. Using the side of your fridge or freezer is a good option, as words can be played around with each day, before or after mealtimes.

Even if your child is being taught a different method at school, it needn’t interfere with his learning if you teach him synthetic phonics at home. Researchers from New York University investigated whether knowing different methods of learning to read would confuse a child and work against each other. Despite worries that learning different approaches could be confusing, the team eventually found that instead of conflicting, they could be beneficial used together and increase the speed at which children learn to read proficiently.

About the Author: EarlyChildhoodEducation